As part of my summer goals, I set the goal to read at least 8 books. I’m inspired now that I’m over the halfway mark with this goal so I wanted to share some of the summer reads that are gracing my list right now. 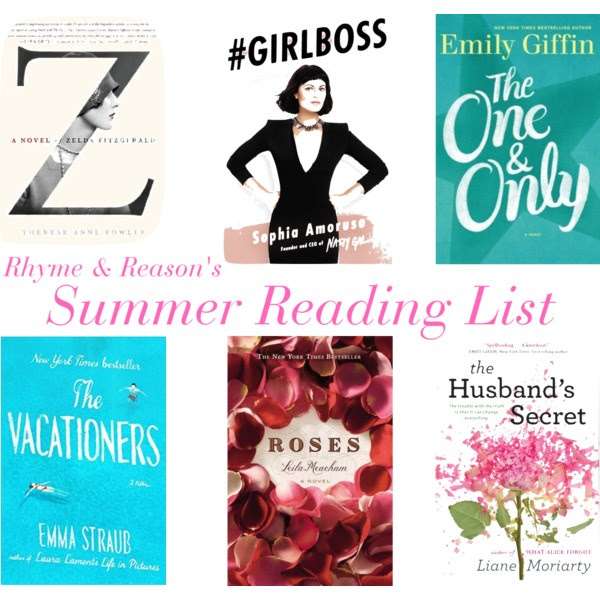 1. Z: A Novel of Zelda Fitzgerald by Therese Anne Fowler: I’ve seen this historical fiction book on a lot of reading lists so I’m finally making it a priority to read the book myself. I’ve read F. Scott Fitzgerald and multiple other books set during the roaring 20s (who doesn’t love The Paris Wife) so I’m excited to dive into this book as it is told as though Zelda wrote it herself.

2. #GIRLBOSS by Sophia Amoruso: This book chronicles the story of how Sophia Amoruso went from being broke to being the founder, CEO, and creative director of Nasty Gal (which has done over $100 million in online retail sales). Be prepared for a witty, brazen, and honest read. Talk about girl power!

3. The One & Only by Emily Giffin: The author of fan favorite Something Borrowed gives readers a new women’s fiction book this summer about a small college football town. The book tells the story of the characters who live in the town until their lives are turned upside down by an unexpected turn of events. This book is getting mixed reviews so I need to read it and make my own judgement.

4. The Vacationers: A Novel by Emma Straub: It seems as though everyone is reading this book this summer! I just read the book last week and I agree with the reviews; it is a delightfully witty book about a family that travels to Mallorca. Each family member is searching for something different but ultimately they all need to decide if they want each other.

5. Roses by Leila Meacham: Roses is one of my absolute favorite books. It is a must read! This historical fiction book spans the 20th century as it tells the tale of three prominent East Texas families and their lives as the characters deal with great loves (including one of the biggest love stories I’ve ever read), tragedies, secrets, and sacrifices. I’ve been thinking about this book a lot lately because Meacham released a prequel earlier this year. I read the prequel, Somerset, at the beginning of the summer and thoroughly enjoyed it; however, not as much as Roses. I’m not kidding, Roses is the best.

6. The Husband’s Secret by Liane Moriarty: A shocking page-turner that is the perfect book to read on your next vacation. Cecilia Fitzpatrick discovers a letter written by her husband that he intended for her to read after his death; however, she finds it while he is still alive and well. The letter contains an earth-shattering secret that threatens to turn around her, her family’s, and her friend’s lives. What does Cecilia do now?

Need a few more recommendations for your summer reading list 2014? I’m about to start the spy thriller The Heist by one of my favorite authors, Daniel Silva. You will be rooting for the main character, Gabriel Allon, as he pulls together his talents as an art restorer and an Israeli spy to recover a stolen art masterpiece. Maybe you are more in the mood for a beach read? In case you missed the summer release last year, pick up a copy of A Hundred Summers by Beatriz Williams. Set in New York City and on the beaches of Rhode Island, this page turning love story will have you captivated the whole way through. It was one of my favorite books last summer. I highly recommend it for anyone who lives or vacations on the East Coast.

When in Doubt, Vacation + Highlights