Spending two weeks in Charleston has been such a dream. I’m so lucky to have a career as a teacher with breaks in my schedule that allow me to travel and see my family. I’m such a proponent of spring break… I think every adult should have it! Allison joined me on the beginning part of my trip to Charleston, which was such a blast! We ate amazing meals (at Husk, Chez Nous, Xoa Boa Biscuit, The Macintosh, and Raw 167), went sailing, shopped until we dropped, and did a lot of wedding planning (thanks for planning with me Al!). We also squeezed in a little time to see my wedding photographer, Virgil, who hung out with us around Charleston and snapped a few photos. Allison and I always laugh when we go on trips together and end up packing similar things because when you live together, are best friends, and travel together it just happens! Both of us have a deep love for blue and white so these outfits of blue and white staples in Charleston are very fitting! 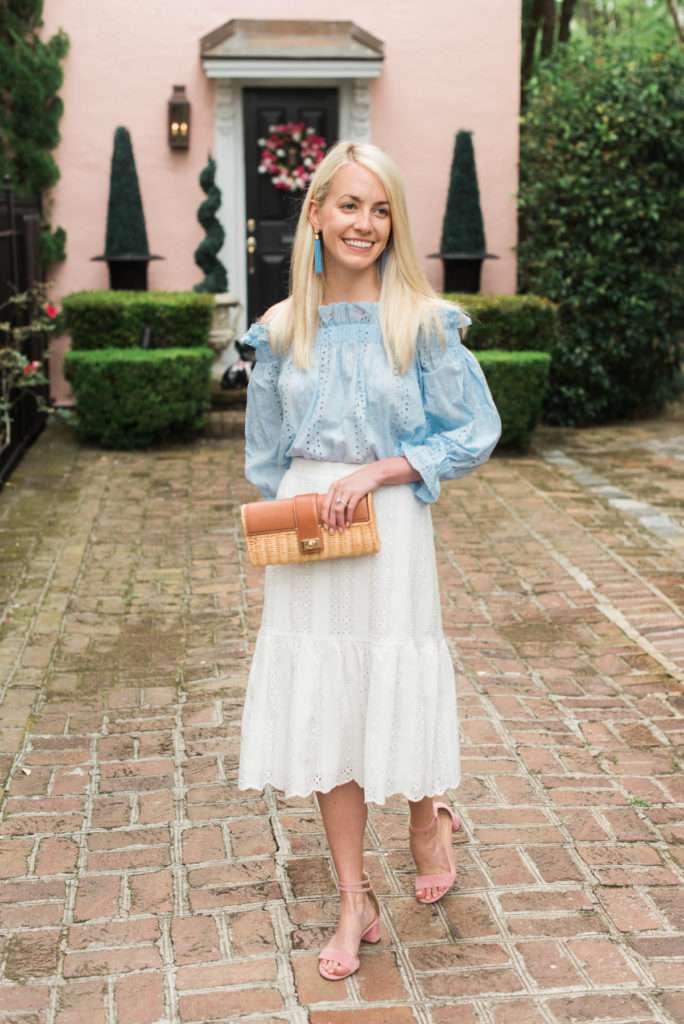 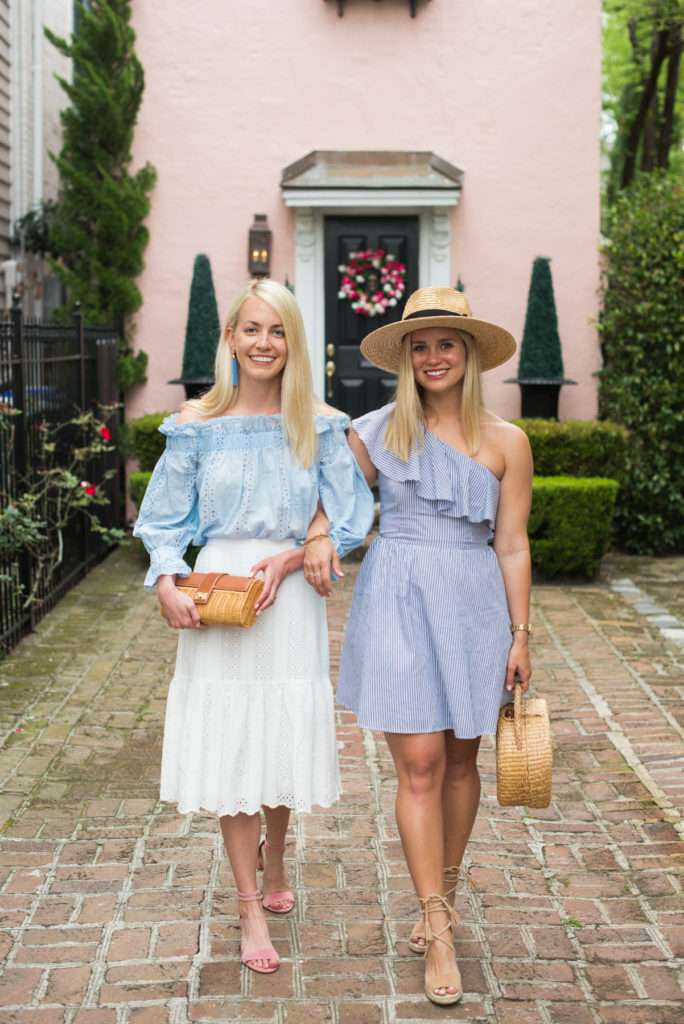 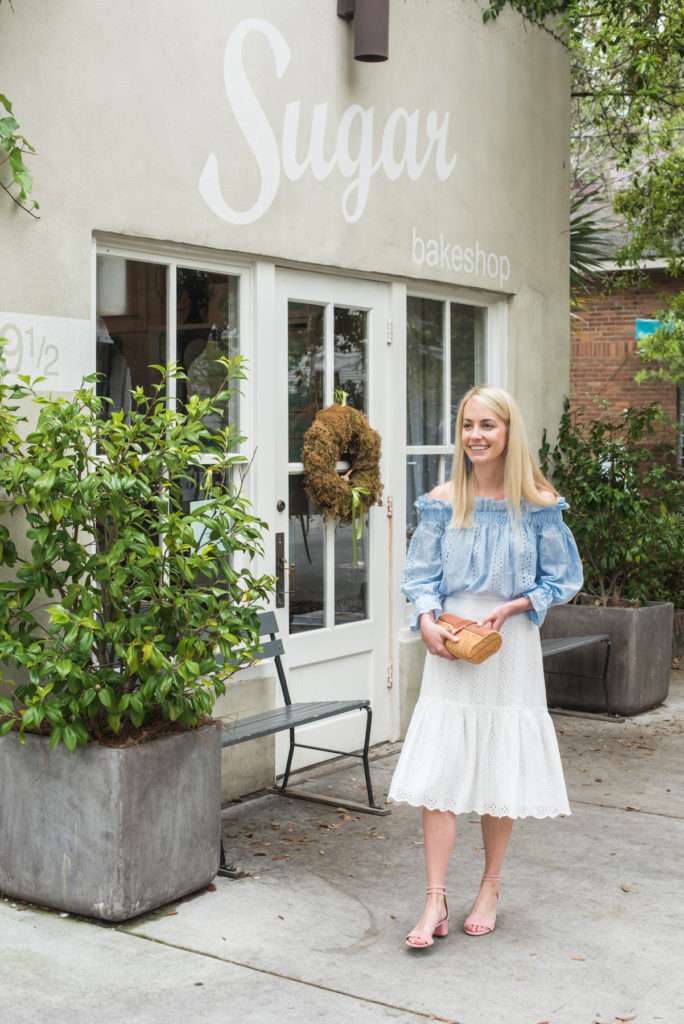 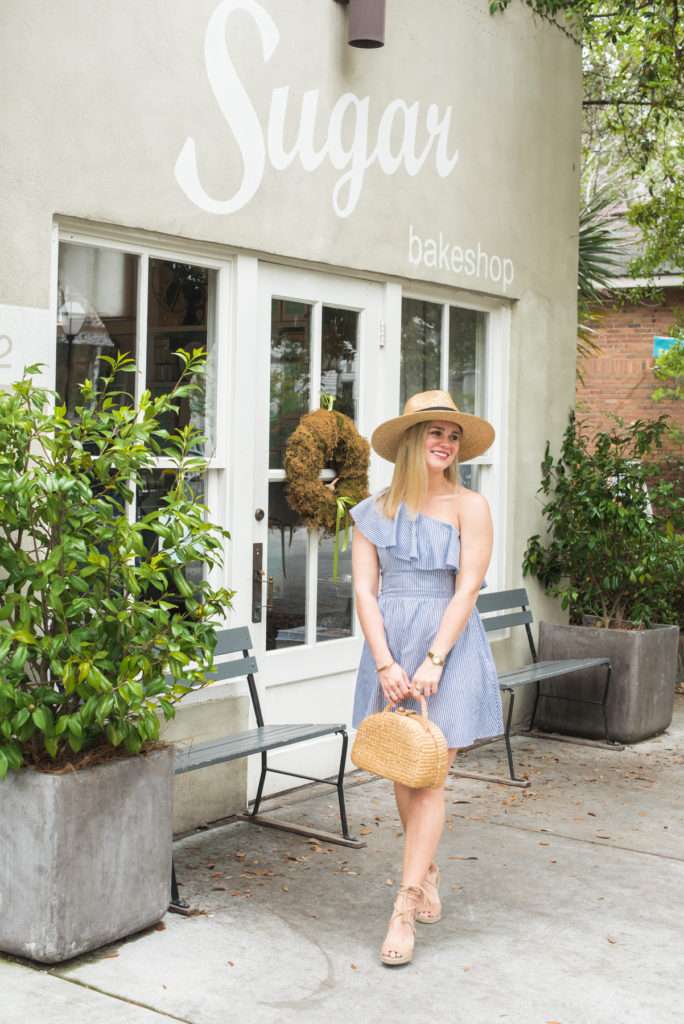 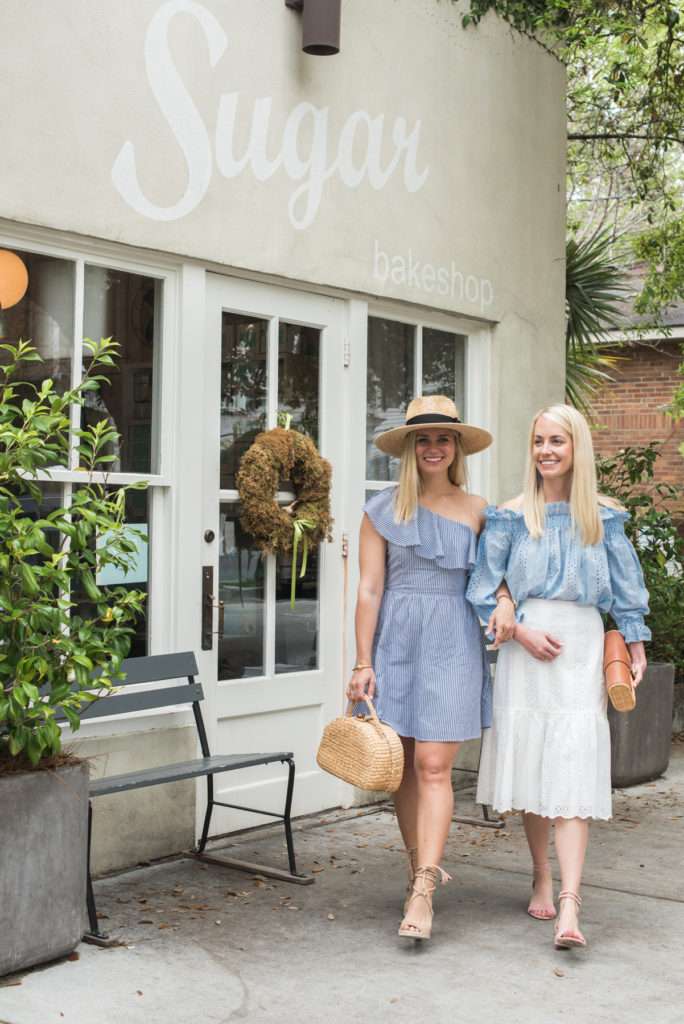 We are both guilty of doing a little shopping for our trip to Charleston! We knew we’d be inspired by the landscape and the pretty flowers blooming all over the city so we really wanted to get in the spring spirit with our outfits. I snagged this light blue off the shoulder eyelet top (under $100!) from Tuckernuck for the trip. I’m so happy I did because I wore it with a bunch including with this white eyelet skirt, with white shorts, and with jeans. I seriously love the eyelet on eyelet look of this top and skirt combination though… it’s definitely my favorite way to style the top! My top also comes in white and I found this super similar polka dot version. 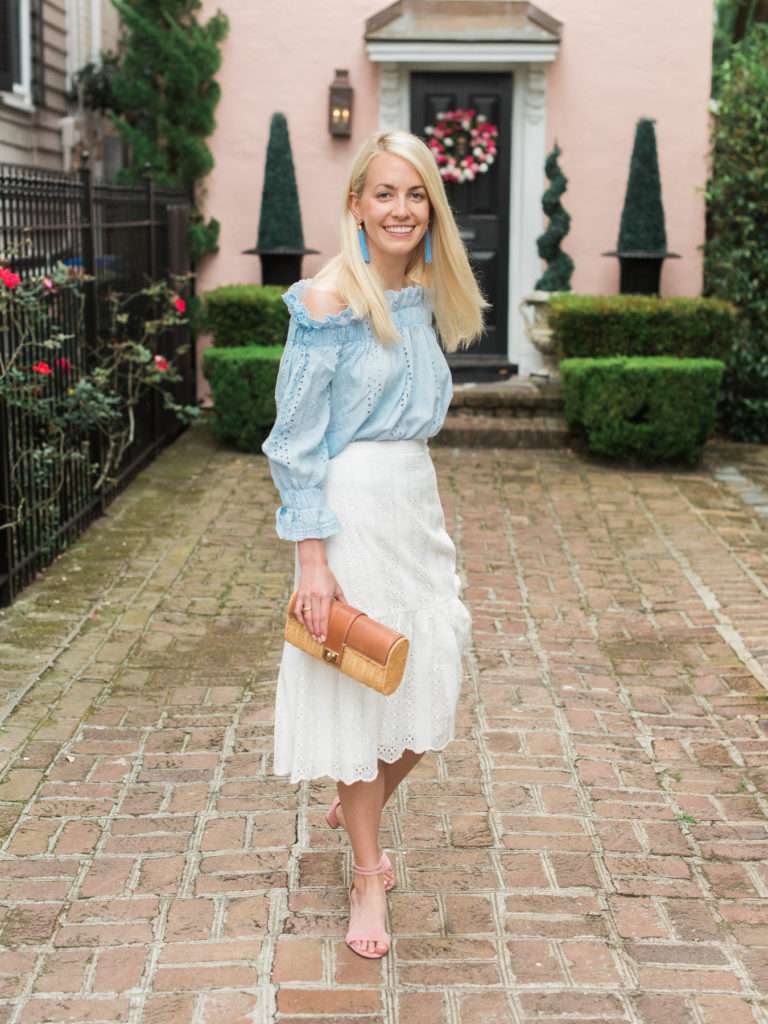 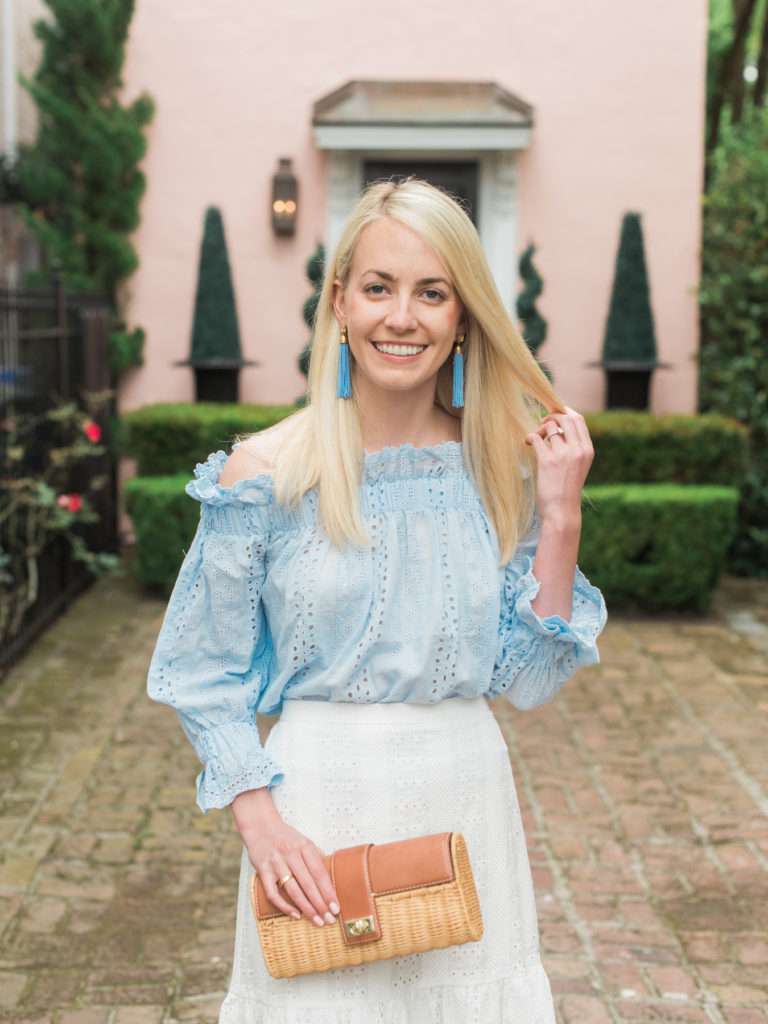 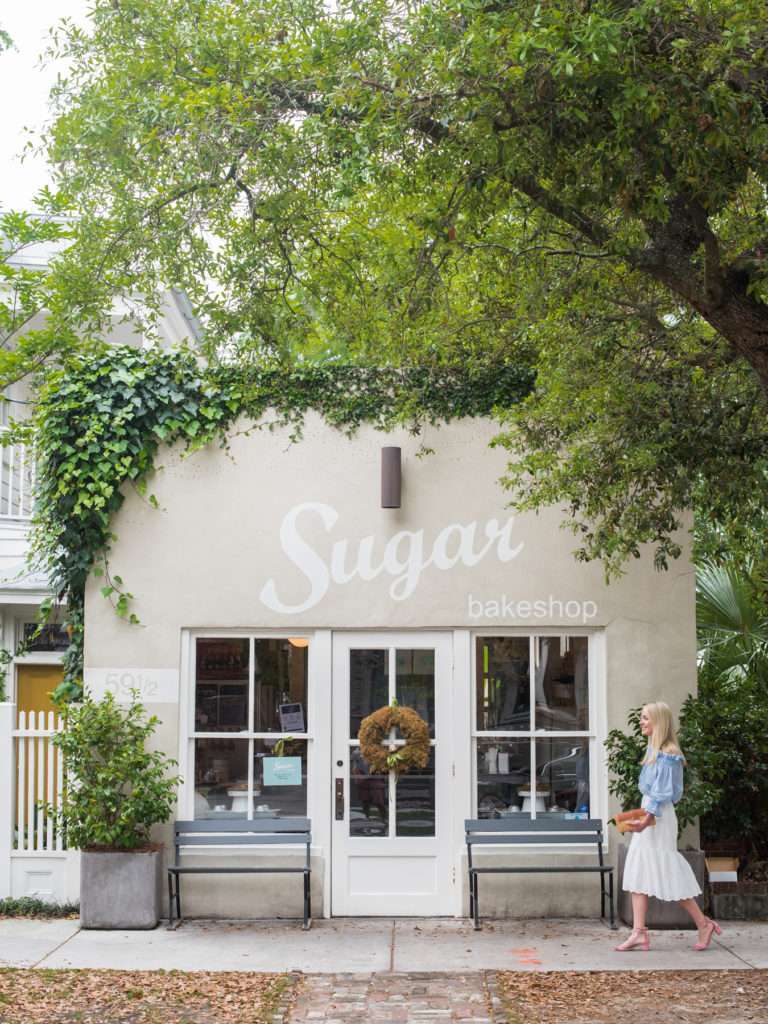 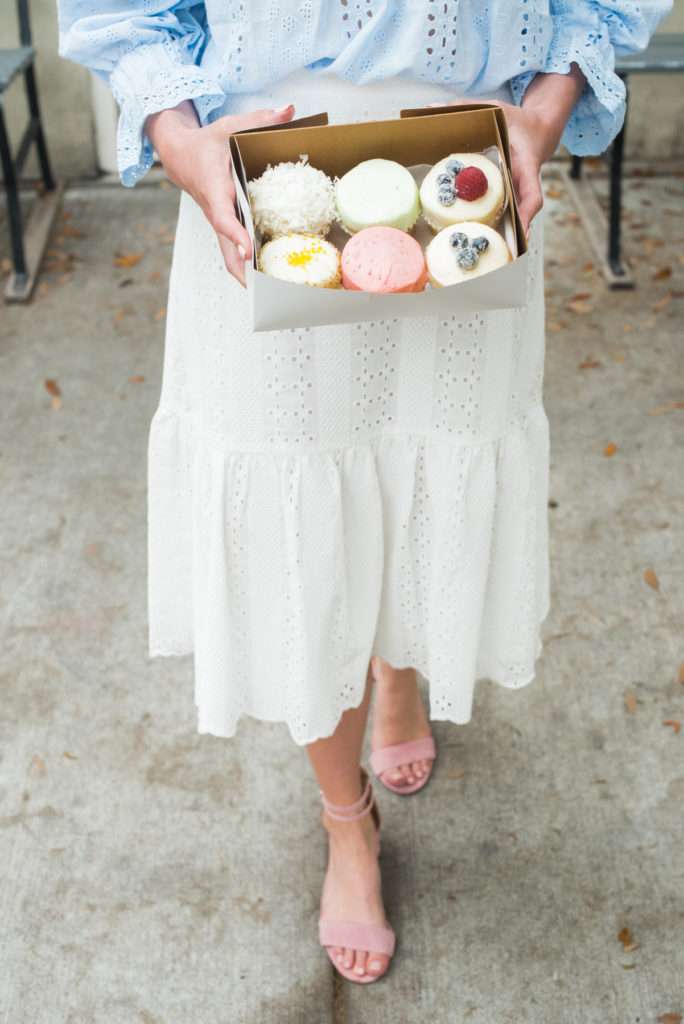 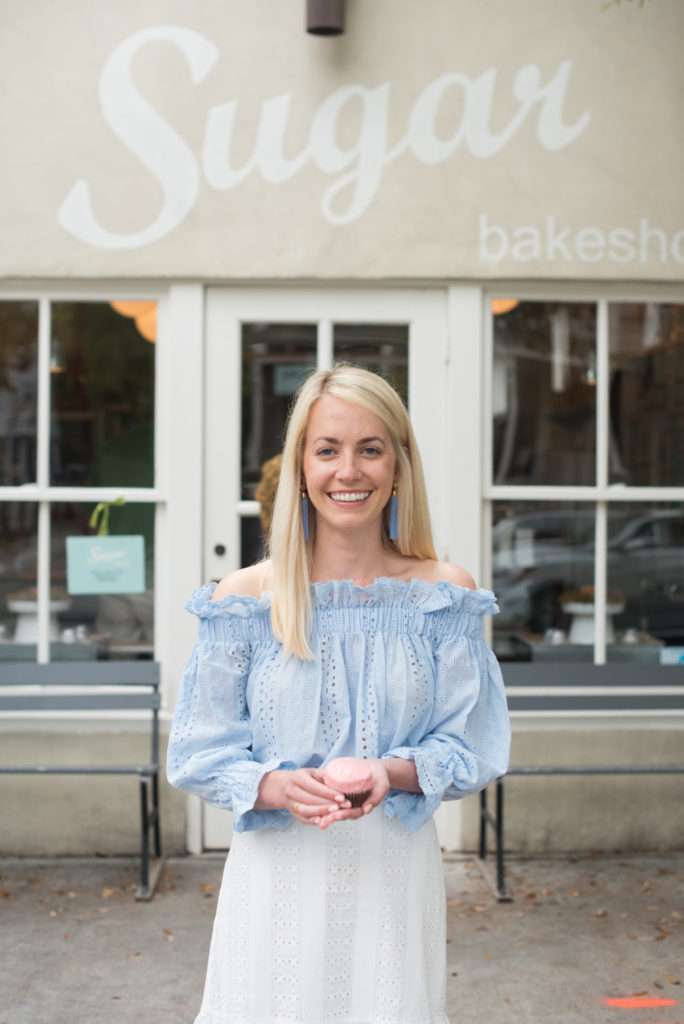 Allison wore this blue and white stripe one shoulder ruffle dress here and out to brunch. It is so cute and the ruffle is such a fun flirty detail. I love the stripes because they are so subtle that you almost can’t see them from a distance. Allison’s dress has been so popular that it is selling out fast (here and here) but I found it for you in every size here and found a bunch of similar and near identical versions for you here, here, here, and here. 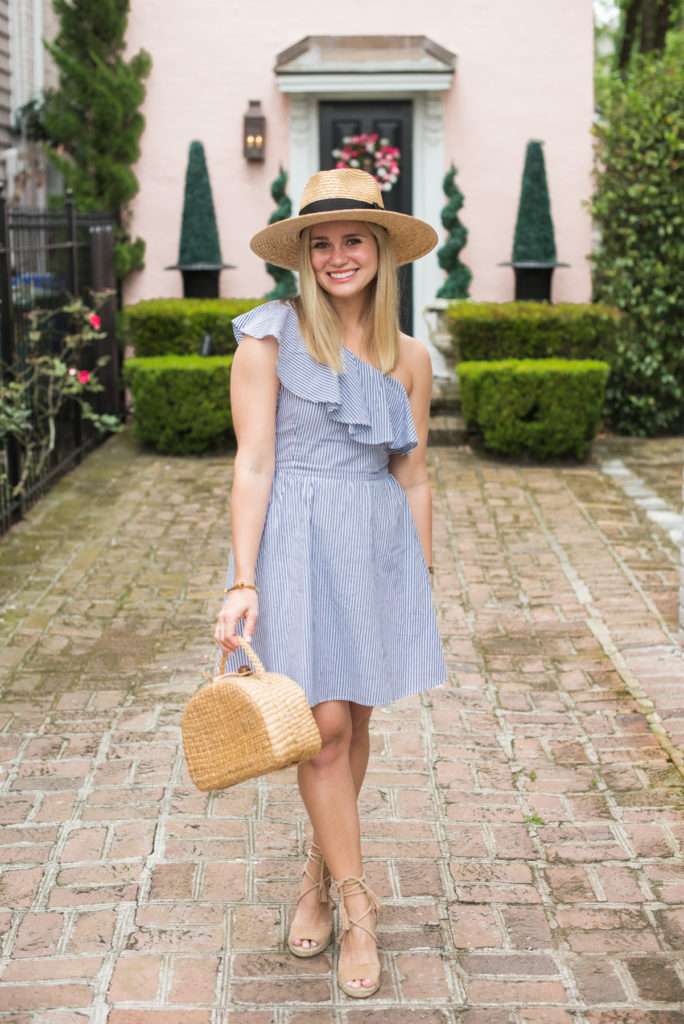 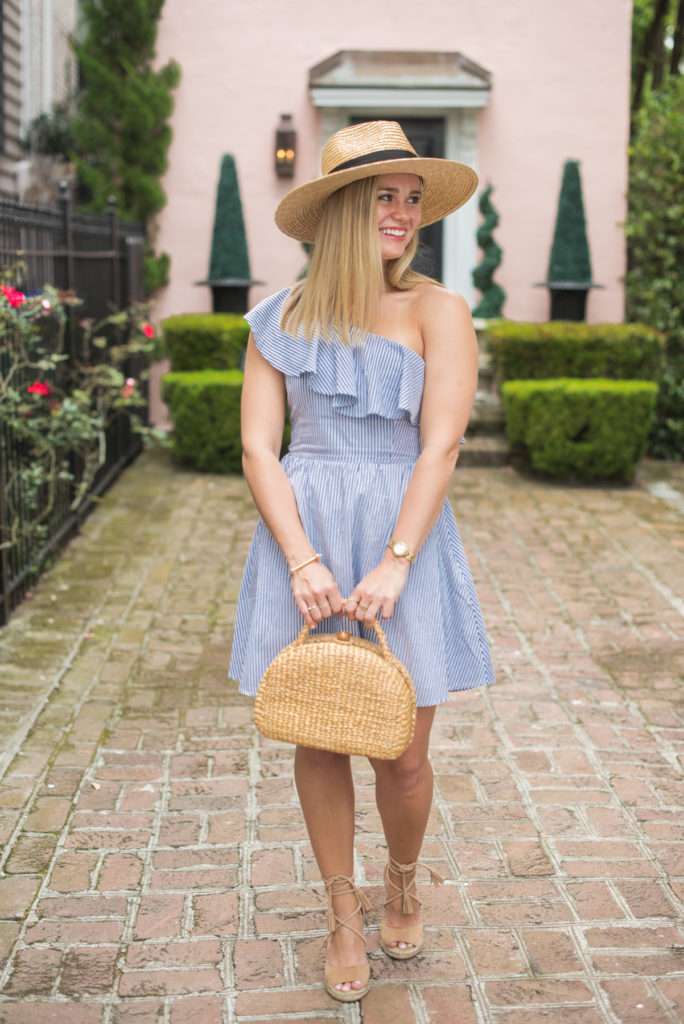 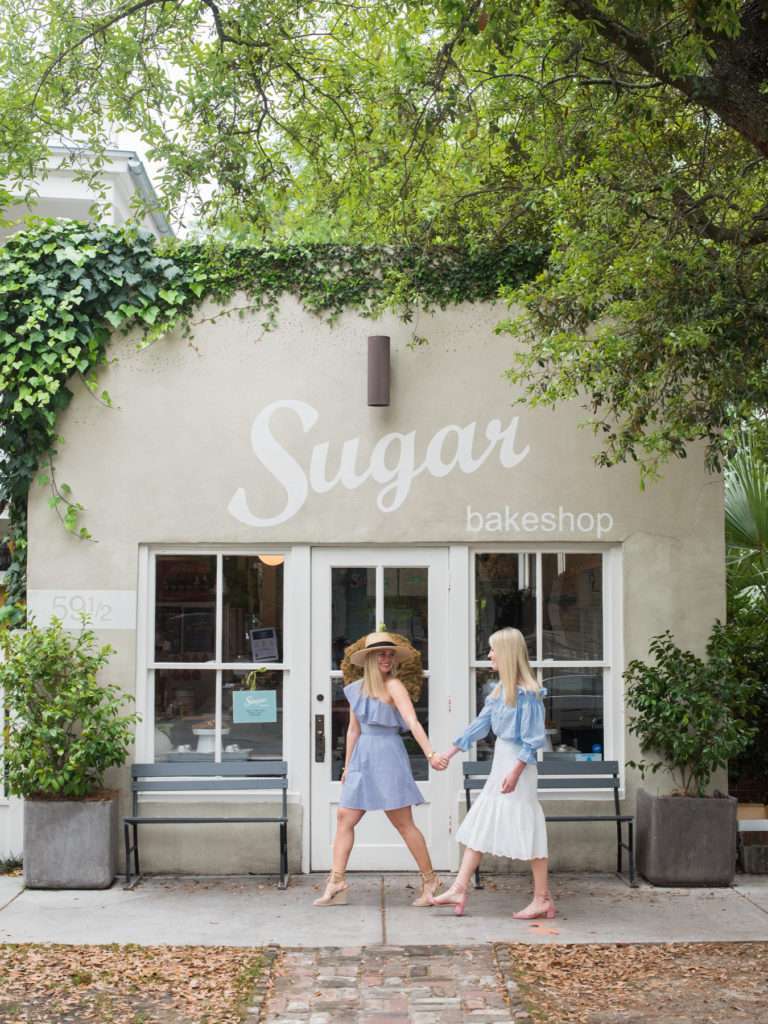 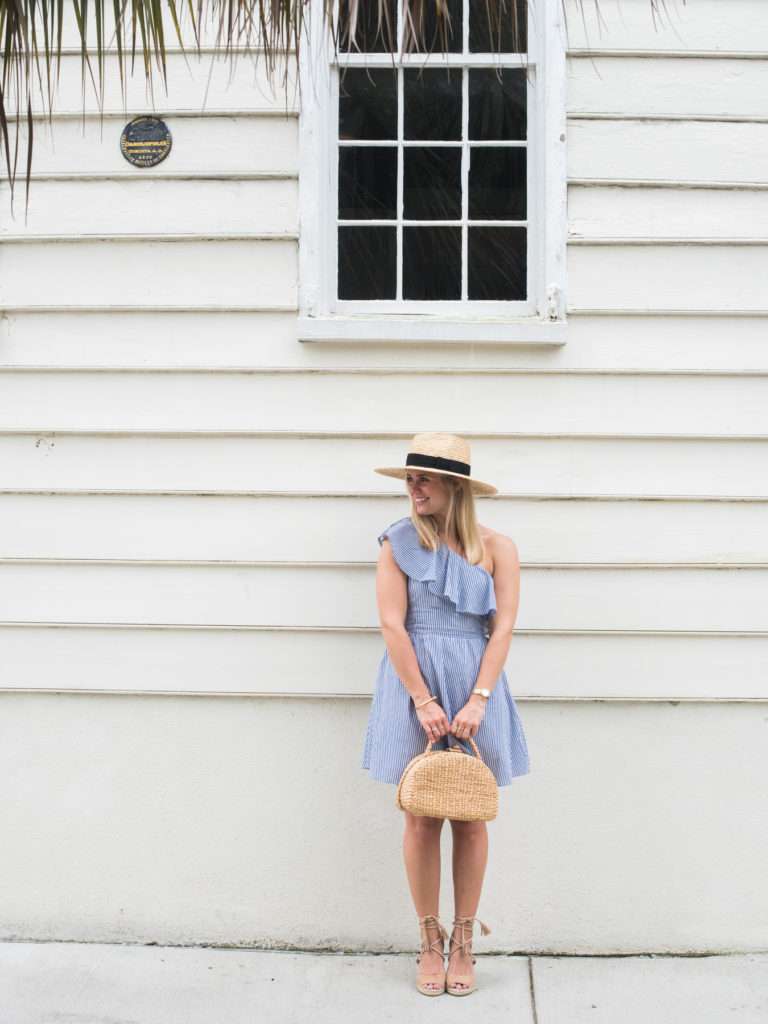 We both played up on blue and white staples in Charleston with tan accessories. My clutch from from J.McLaughlin last year but they have three super similar versions available this year: one, two, three. Is it just me or has J.McLaughlin had the best purses this season!? They are way cuter than any other retailers I think (spoiler alert: I just added this little round straw bag to my collection!). Allison carried her Five Story straw bag all over Charleston because it fit everything she needed for a day out and completely hits the mark on the straw bag trend that we’re both adoring right now. The bag is sold out but I found these five lookalike bags so you can snag her look: one, two, three, four, five. Allison is also wearing the tried and true straw hat we both have and love (under $45!). We both wear our hat non-stop (last seen on me here)! 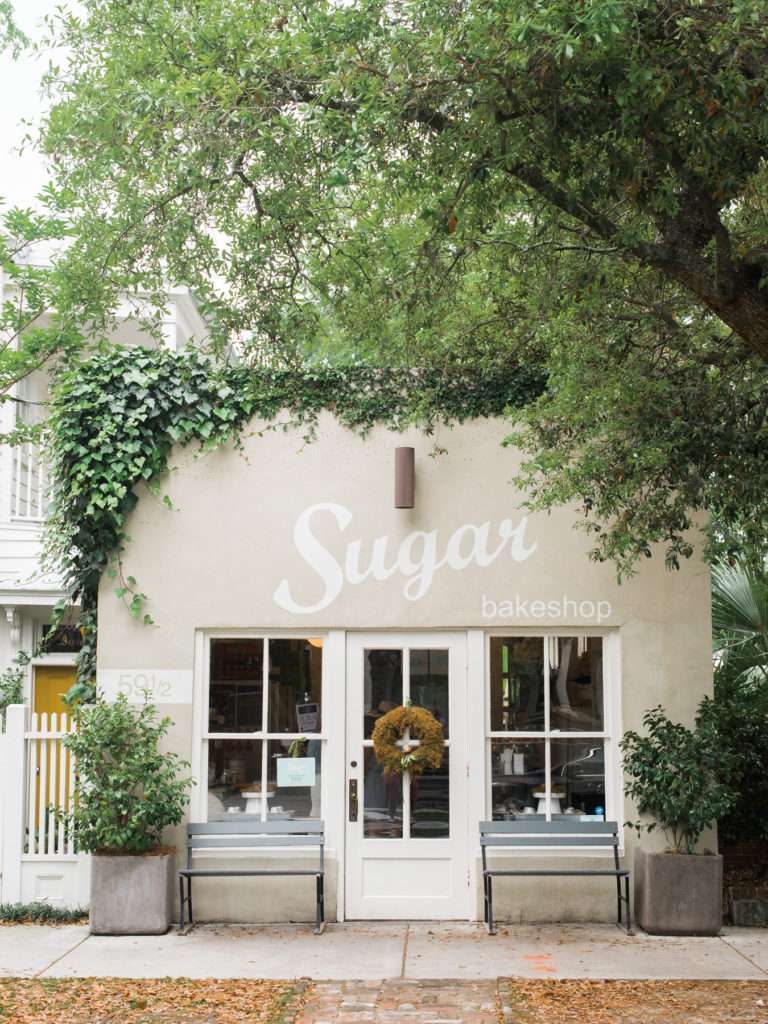 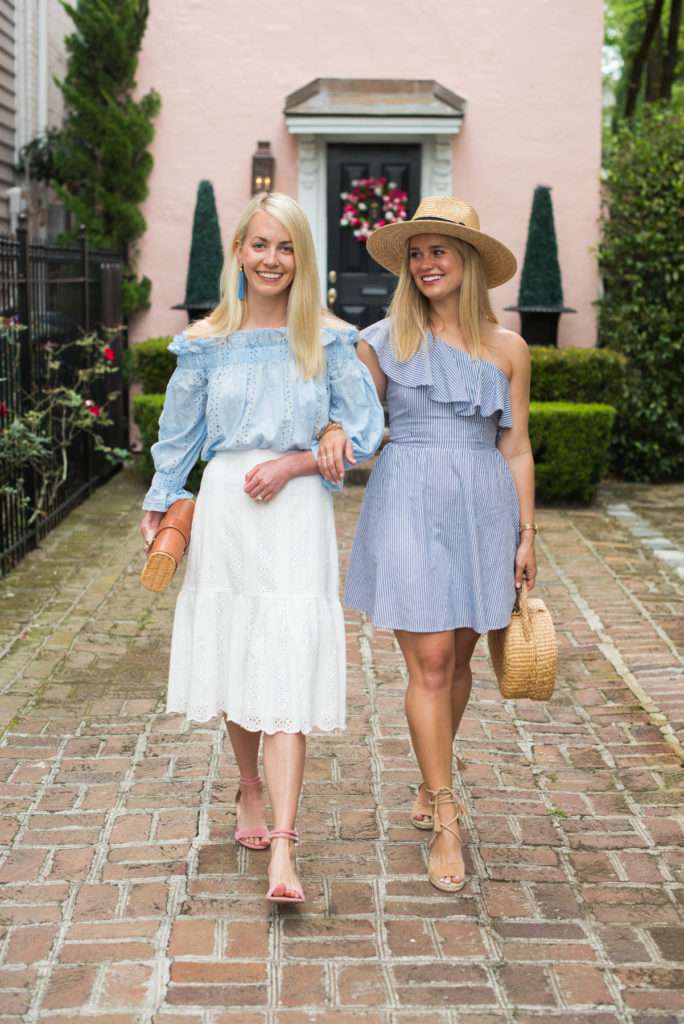 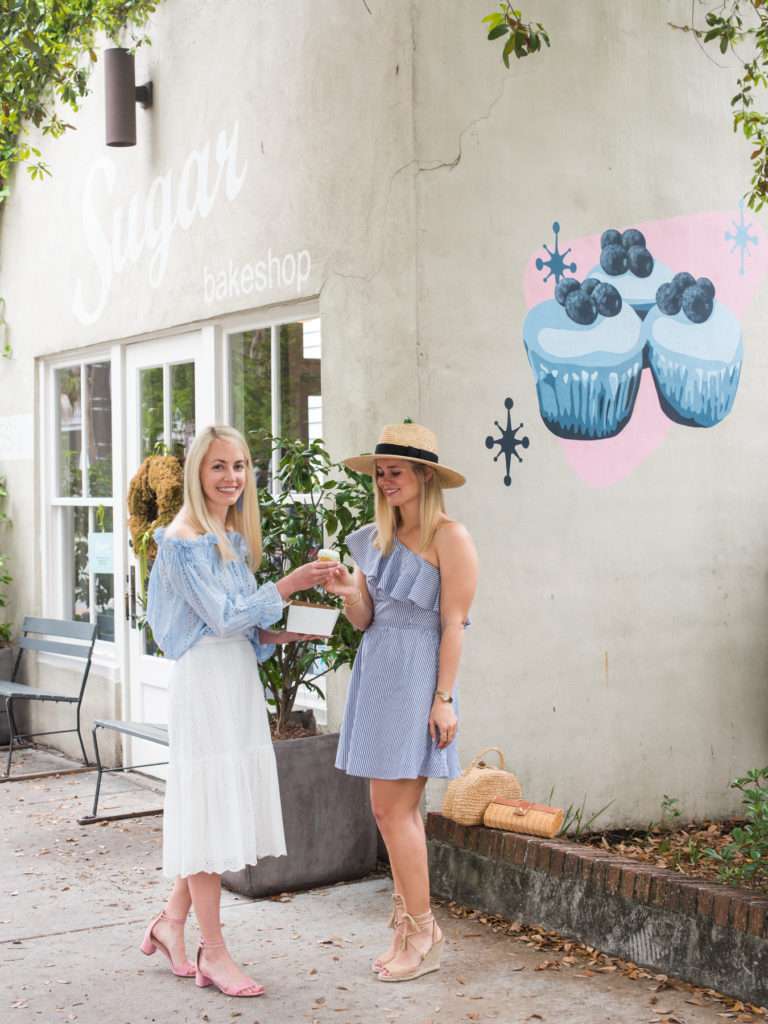 I tossed on my blue tassel earrings (old – similar, similar) to give my outfit an extra punch and slipped on a pair of pink sandals because you know I love pink. J.Crew sold out of my pink shoes but these similar shoes have the same affect: one, two. 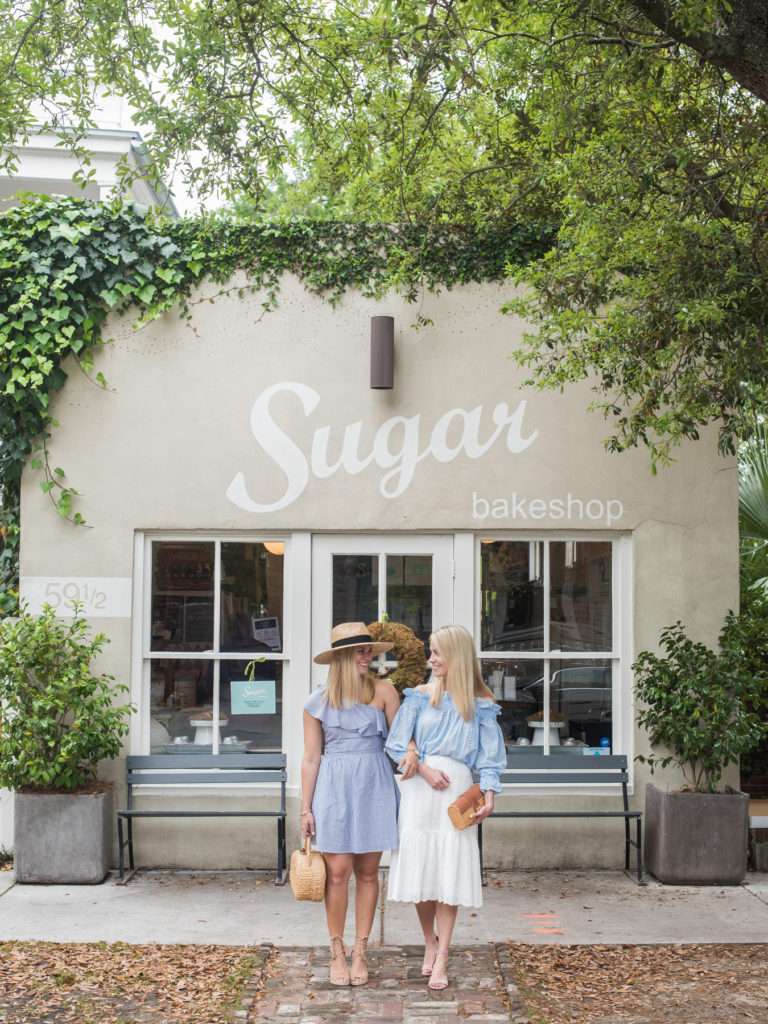 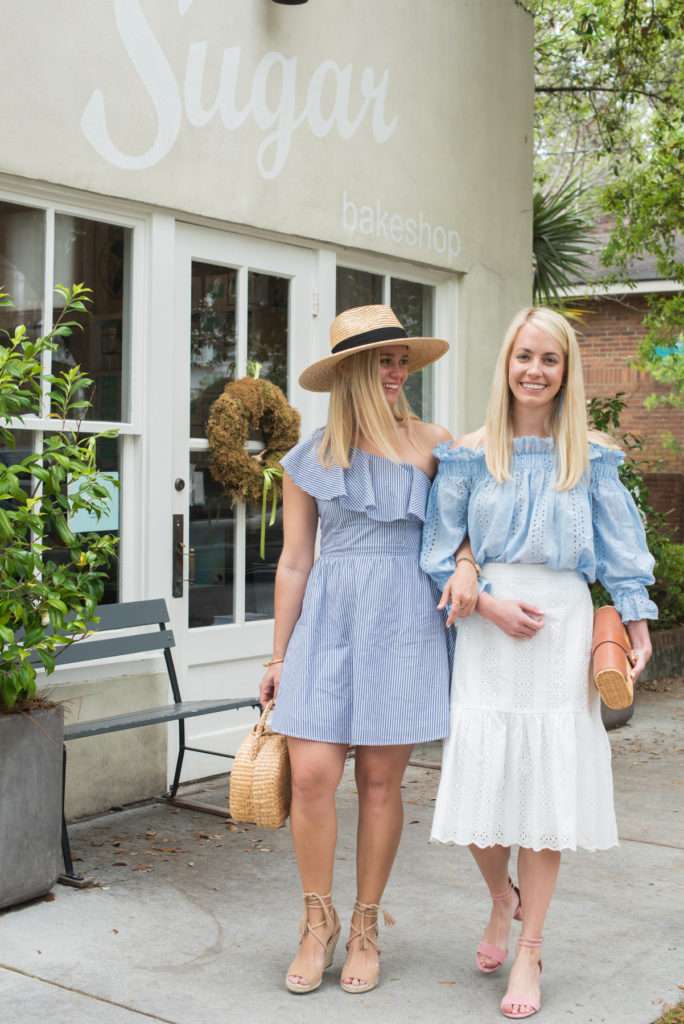 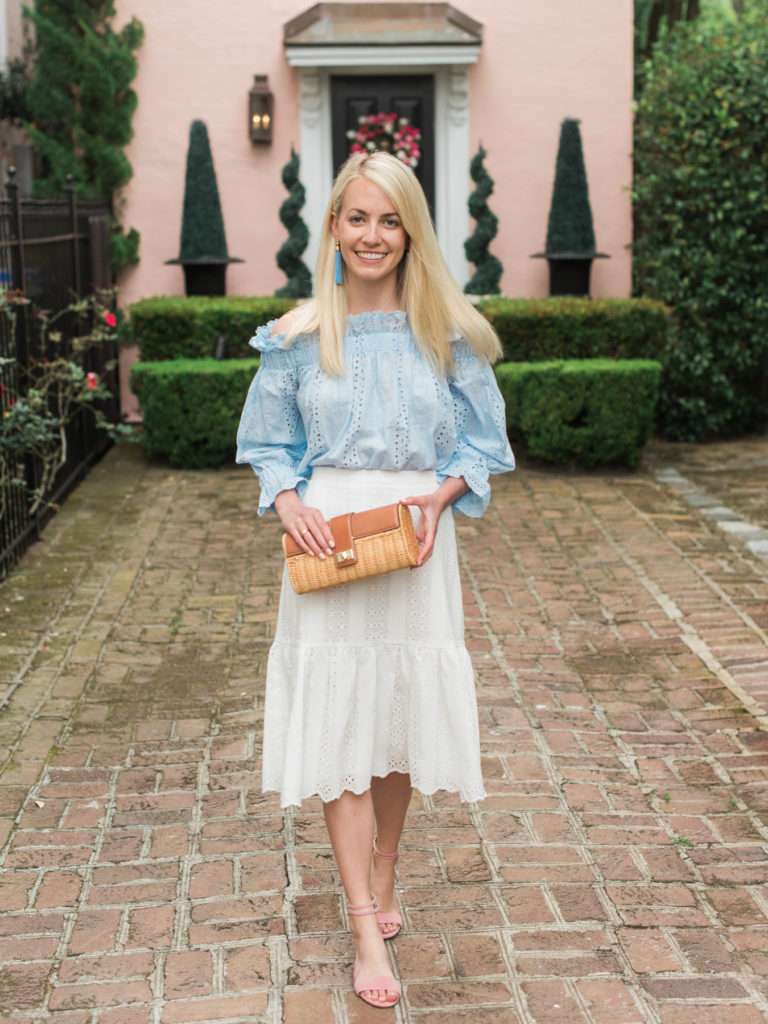 Get the Blue and White Staples in Charleston look: